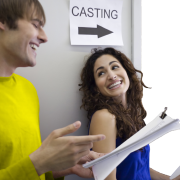 On 8th & 9th December TMS and R/A are holding auditions for a new single produced by EMI producer Toby Farrugia.  The track (already designated to EMI) requires a strong vocal.  The chosen candidate will receive vocal rights, credits and record their vocals in the studio next week for presentation to Toby and EMI

(The successful singer(s) will be offered a contract/buy out fee).

Applicants are to be aged 17 upwards and must send a vocal demo to info@themusicstudy.co.uk along with head shot and a short description.  The dance track can be sang by either a male/female vocalist or boy/girl band.  If selected in email application the artist will receive a copy of the track with and without vocals and a lyric sheet.  A full extended remix will also be provided.  The producers have stated that the lyrics and guide track are for reference only and the artist auditioning may change melody, arrangement & lyrics to suit them.  Further details will be sent too successful candidates by e-mail.  To apply please send your details to info@themusicstudy.co.uk ASAP as audition slots are limited.

LEEDS RETAIL ASSOCIATION RE-LAUNCHES IN THE CITY
An organisation that aims to give Leeds ‘one voice’ has re-launched in the City. Leeds Retail Association.

Leeds Retail Association (LRA) is a body set up to act as a broker between all customer-facing businesses to connect them with each other, identify promotional opportunities and address issues and challenges facing the City.
Spearheaded by local retail expert David Laycock, the LRA has around 30 members from all industries including media, sport, food & drink, entertainment, education, designers and clothes-retailers and is now looking to recruit more members City-wide.

Leeds Retail Association members meet up every month at different City Centre venues to discuss topics that are important to them, seek advice and share information.
“It’s great to all get together in one room,” says David. “Simply connecting with other businesses is hugely valuable, and we have had great feedback, but we realised that there was a need for something more. Businesses were telling us that they needed to be in touch with the City constantly.
“In response to this, today we have launched a brand new website that features an Online Forum for Leeds Retail Association members. We know that time is of the essence to businesses large and small and now they can connect with each other at the touch of a button no matter where they are. It’s not only time-saving but it is a place to get results.”
The website – leedsretail.co.uk – has information that is available to all who visit it but with sections that are for member use only and intends to be a ‘one-stop-shop’ for all things Leeds.
As part of its re-launch the Leeds Retail Association has produced a Leeds-centric film that gives a snapshot into ‘a day in the life of Leeds’. Using some 30+ businesses ‘One Leeds’ shows what’s on offer in the City from early morning through late at night.
“We have hosted a private screening of the film for those who ‘star’ in it, but we have only just gone public,” explains David. “We are really proud of it – everyone involved is proud of it; it shows off everything that’s great about Leeds by using the City’s own talent.”
The film’s creators are (Leeds-based) Creative Agency BlackBox Creative, the script is written by (Leeds-born) writer Jamie Donoughue and voiced by (Leeds-born, bred and based) Actor Luke Dickson and the music is composed by (Leeds-based) Josh Weller.
It stars around 35 key City characters including music bar Mojo, the Victoria Quarter, Kirkgate Markets, West Yorkshire Playhouse, Accent Clothing and Leeds United.
“The objective of the film is not only to showcase the City’s eclectic offer but to also encourage new members to the LRA,” David continues. “The more members, the louder the voice we have in the City, the region and indeed the country.”
David concludes “I believe that for a city to be internationally renowned it has to first believe in itself – to believe in itself it should have confidence in its offering and to have confidence in its offering it has to know what is on offer – that is the very foundation of the Leeds Retail Association.”
For more information about Leeds Retail Association visit www.leedsretail.co.uk or contact David Laycock on david@leedsretail.co.uk / 07969 221 290